things to do locally....

Things to do locally....

We are located approx. 7kms from the historic town of Cognac. Famous all over the world for it's alcohol, Cognac also boasts being the birthplace of Francois Premiere, King of France from 1515 - 1547. The Charente river flows through Cognac. There is a recently renovated quayside which is a lovely walk and leads up, through the original 1000 year old castle gates, to the old town via cobbled streets. Many of the great Cognac houses are located in the town, including Martell, Hennessy, Otard and Camus. Many of the Cognac houses offer tours and tastings. The Musée des Arts explains the history of this world-renowned alcohol. You can take a trip on an authentic barge, or "Gabare", along the river Charente. Small boats/canoes can also be hired to explore the locale on the water. The beautiful old town has impressive buildings, majestic architecture, museums and beautiful public gardens. 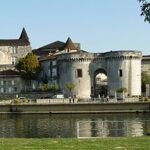 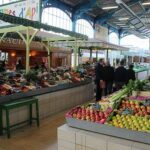 http://tourism-cognac.com Saintes has a lot of Roman history including a Crypt at L’Eglise d’Europe and a very impressive Amphitheatre. A Roman triumphal arch stands proudly alongside the Charente opposite to the l’Abbeye de Saint-Marie-des-Dames. Discover the history of this ancient city through its architecture. You can stroll near the Charente river and enjoy the parks, shops and the pleasant atmosphere of this beautiful city. 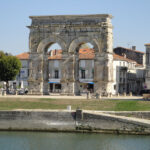 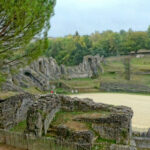 http://www.visit-saintes.com Courvoisier is based in Jarnac which is 25 minutes away and Grand Marnier is in Bourg - Charente which is about 20 minutes away. There are daily markets in both Cognac, Saintes and the surrounding area selling fresh fruit and vegetables, meats, cheeses, fish and seafood which has been caught on the nearby coast. There is an Intermarche supermarket 5 minutes, by car, from the Gite and Lidl, Auchan and other supermarkets in Cognac and the surrounding areas. In the middle of the sunny vineyards, there are many individual independent producers of Cognac, Pineau des Charentes and Pays de Charentais wines who will be happy to welcome you for a tasting. An hour away, to the south, begin the vineyards of the Bordeaux region. St.Emillion is around 90 minutes away by car. A ferry ride from Royan goes directly to the Médoc and the castles of Margaux, Pauillac and many other big names. Follow the Route des Huitres on Ile d'Oleron, or visit the fish market in Royan. Royan and Ile-de-Re are between 40 - 60 minutes away by car. Both are a great day out with fantastic beaches and eateries. Ile-de-Re is accessed via a very impressive 3 km bridge. However, there is a toll to pay! Once on the island the best way to see it is by bicycle. You can have a protracted lunch by having Fruits de Mer in Ars-en-Re, cycle a couple of kilometres down the road to La Couarde-sur-Mer, have your main course and then move on to an ice cream parlour in St.Martin for desert! Exercise while you eat…!! Ile de Re is famous for it's fish and shellfish, potatoes and sea salt harvested by hand. All these discoveries are waiting for you on the markets, in the festivals, the bistros, the Michelin starred restaurants, coming from the gastronomic shops or directly from the producers. 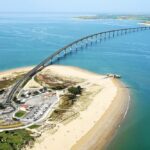 La Rochelle is about 60 minutes away by car and is a very pretty harbour town with lovely narrow streets and some great shopping. Angouleme is about 40 minutes east of us. The city is on the top of a hill overlooking the Charente River. It is the home of French cartoons and in February hosts the Festival de Bande Dessine which translates as Comic Strip Festival. Many of the buildings have huge cartoons painted of their walls. Every year on the third Sunday of September is the Circuits des Ramparts. This is the car enthusiast's heaven.  The roads around the city walls are closed off to race classic cars from all over the world. 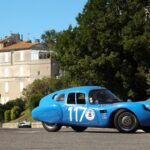 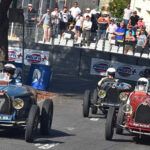 Pons is a medieval village which is dominated by the 30 metre high donjon (The Dungeon) completed in 1187. Next to it is the Pilgrims' Hospice with its 12th century vaulted ceiling . This is a UNESCO World Hertitage Site. Bordeaux, which is just over an hour and a half from us by car, is certainly a city worth visiting. It is classed as a UNESCO world heritage site with 350 listed monuments. The splendour and majesty of the city’s 18th century architecture will blow you away, especially the Place de la Bourse. Also worth seeing are the Pont de Pierre, the wonderful stone bridge, built in the early 1800’s. Just behind this bridge you will find the Porte Cailhau dating back to the end of the 15th Century. With it’s own museum, this was originally the Gateway to the Medieval city. The beautiful Gothic Cathedral Sainte Andre and neighbouring Pey-Bernard Tower, from where you can enjoy a panoramic view of the city are also well worth a visit, along with the many art galleries and museums, not forgetting the Grand-Theatre de Bordeaux, where classical concerts and operas can be enjoyed. As well as a range of regular outdoor markets, at the Place des Quinconces, which is the largest city square in Europe, two huge brocantes are held annually one in the summer and one in November/December. Just behind this the annual Christmas market transforms the city into a winter wonderland during the month of December. All of this together with a plethora of bars and restaurants to choose from, make Bordeaux a must on your list of places to visit. http://www.bordeaux-tourisme.com

Indigo by Martell - a rooftop bar on the 5th floor overlooking the town of Cognac. Great views, great drinks in a unique setting.

Bar Louise - a cocktail bar in the centre of town offering as wide range of cocktails, Cognacs.etc.

Garage Bar - offering draught beers, etc. You can also eat here, it is a limited but very good menu.

Bar Luciole - located in the St.Jacques area of Cognac this cocktail bar offers a vast selection of cocktails from the classics to their own in-house creations.

Le 1838 at Chais Monnet - big sofas and chairs welcome you to this beautiful, olde world bar. Look up above the bar to see a “library” of Cognac bottles. Huge menu offering everything from a beer to a cocktail and everything in between...

La Ribaudiere, Bourg-Charente. Overlooking the Charente river you can enjoy the excellent cuisine and watch the world go by. Highly recommended in the 2020 Michelin Guide. (€€€€€)

Les Foudres is a formal dining environment with food prepared to the highest standards. (€€€€€)

L’Atelier, Cognac - On the banks of the Charente River with a courtyard overlooking the river where you can dine al fresco. Good quality food at reasonable prices. (€€€)

La Courtine, Cognac. On the banks of the Charente river with a lovely terrace where you can dine al fresco. Good quality food. (€€€)

La Table du Green. Golf du Cognac,St.Brice - Recently opened and offering both “Formule” and A La Carte menus at lunchtime. Sit on the terrace overlooking the 17th and 18th fairways and enjoy the ambience with friends. (€€€)

The restaurant is open on Thursday, Friday and Saturday evenings with an A La Carte menu. (€€€)

La Belle Epoque, Cognac - Restaurant inside the Heritage Hotel in the centre of town. Offering a small but delicious menu. (€€€)

There are some very good courses all within a 90 minutes drive.

Royan - 18 hole course which winds through a pine forest and natural dunes. Excellent restaurant overlooking the course and the sea. Exceptionally busy during July and August. https://www.golfderoyan.com

The Chateaux course adheres to the purest tradition of Scottish “Links”. Wide fairways bordered by heathers and gorses carry the players through unspoiled nature. Fantastic greens and a Championship course which is a golfing challenge of the highest order.

Les Vignes course is embedded in a landscape typical of the region, where the heath and the maritime pines enrich the architect’s design. Long pars and elaborate greens with strategically placed obstacles demand thought and precision. https://golfdumedocresort.com

Eric Ezendam a multi disciplinary Dutch Artist who has exhibited in the Netherlands, France, Belgium, USA and the UK, organises Art Workshops in his studio nearby. These Workshops vary from 1 day to 5 days. They include a Drawing workshop using pen and ink, charcoal, pastels and water colours. There are also Still Life, Landscape and Portrait workshops available. If you are interested in attending one of these workshops, please let us know and we can put you in touch with Eric.

Nelly Bardeau at Karma Zen can offer sporting or relaxing massage from her premises in Juillac-le-Coq. Nelly, who we can highly recommend, can also visit the gite to provide your massage if you prefer on Thursday, Friday or Saturdays. She can be contacted at karma-zen.fr